Web Games demo demonstrates technologies used for voice activated commands in apps and games within web browser. Since demo uses Google Web Speech API, it is fully supported only in Chrome version 25 and later, for now.

The first part of demo shows a simple voice command usage. Immediately after demo starts you will be prompt to allow device activation - microphone. When microphone is activated whatever the user says is recognized and displayed on the screen. However, for this purpose only designated voice commands initiate the screen action. They are: UFO, GO and NEXT, as shown in the top right hand corner of the screen, near microphone symbol. Each time the user says “UFO”, “Here we go UFO!” will be displayed and two UFOs will be moving across the screen. If user says “GO”, “Plane is coming!” will be displayed and a plane will be moving across the screen. You can repeat both words/commands as many times as you like, and each time the same action will apply. To move to the next screen user needs to say "NEXT". 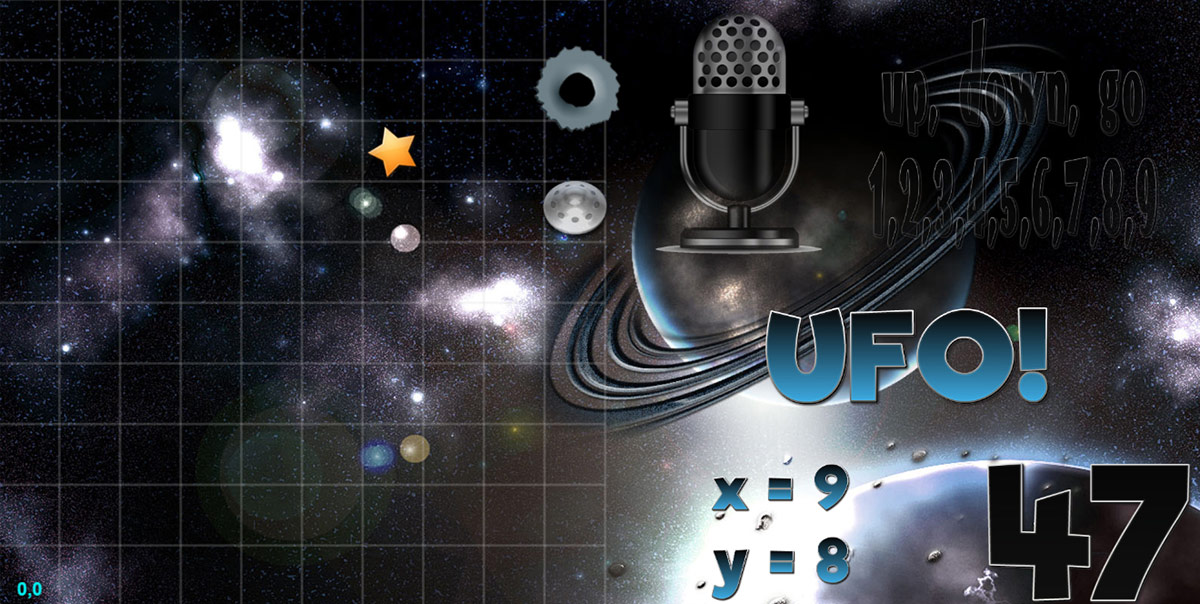 The second part of demo demonstrates a simple game called Black Hole, designed to be played by using voice commands only. The goal of the game is to send the UFO to the hole by saying both axes coordinates of the hole within limited time. Voice commands recognized by the game are, as shown in the top right hand corner of the screen near the microphone symbol, UP and DOWN to switch from X to Y axis (see the picture of UFO near the X and Y values); Numbers 1 to 9 to determine position on each coordinate; And GO to start. To play the game, player needs to position the UFO on each axis by saying "UP" and/or "DOWN" command and continue by saying the value to pinpoint the position of the hole. When player says GO, an UFO picture will appear at 0,0 coordinate of the grid and will move to coordinate designated by the user. If this coordinate matches the "hole", you win and your score is shown. If you hit an empty space, you missed the hole and game ends. Also if you hit a star you crash the UFO and the game ends too. After game is over, just say YES to play it again. Go on, try it out and explore new possibilities!